Movies That Matter: The Shelter or life below minimum human rights standards 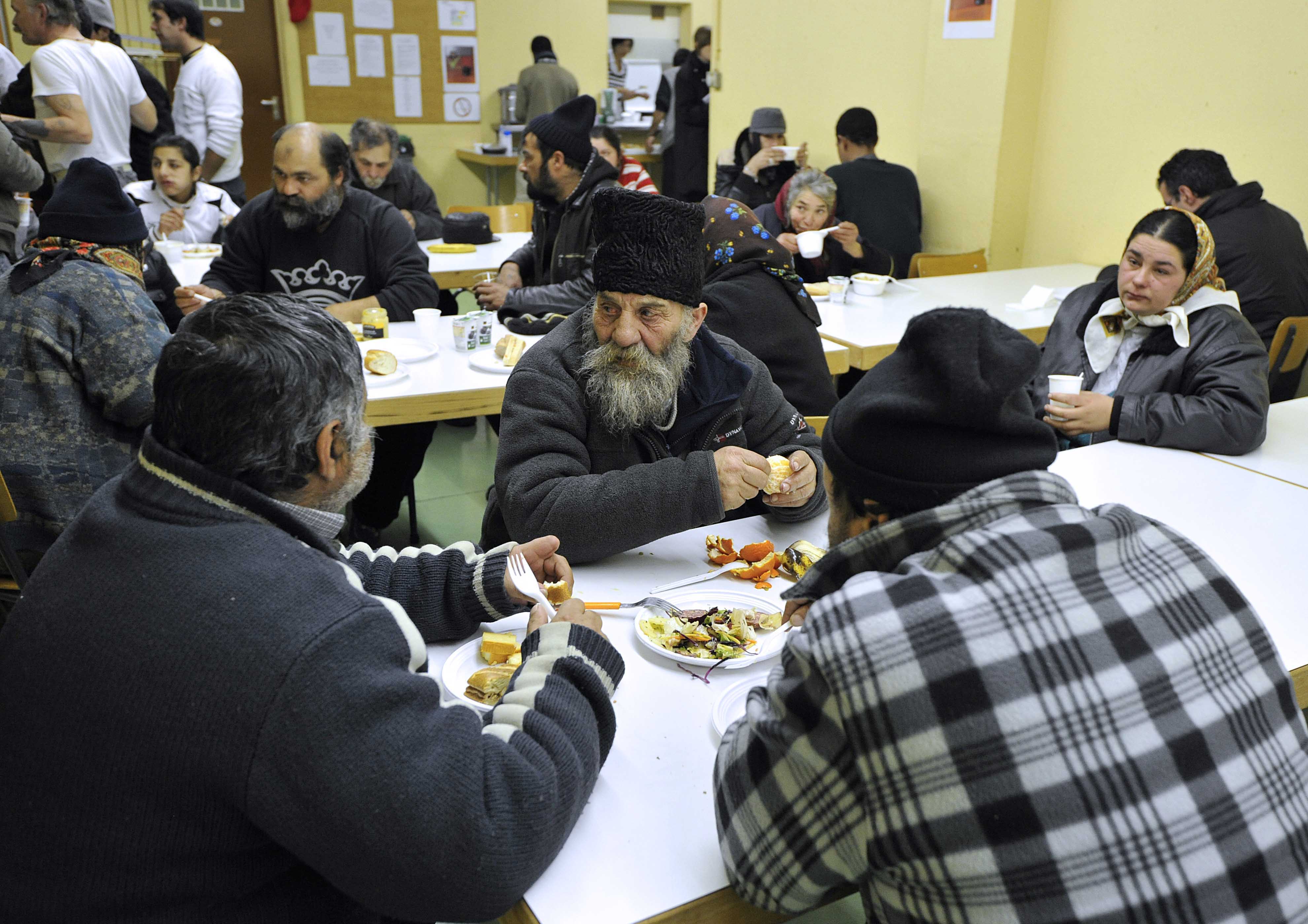 Monday 2 March Movies That Matter screened the documentary The Shelter by Swiss director Fernand Melgar. Melgar's signature style is to follow persons in morally ambiguous situations close up while refraining from making value judgments. Melgar has allready made a number of documentaries, each having to do with asylum seekers and migrants. In The Shelter the subject is a temporary shelter for homeless people in Lausanne in the wintertime.

A 100 minutes long documentary of this kind and with this subject matter, is first and foremost a physical experience. Melgar and his team film people almost unaware. Their procedure is to first meet and get to know the people they eventually film. But this can't explain the naturalness of ' performance' in full. For instance, the nightshelter is only open during the winter, so Melgar can't have met the 'inmates' in autumn, as there was nobody around. Also in the documentary we meet people coming to the shelter for the first time; they must be new to Melgar too.

Perhaps the answer is that the daily struggle for a place to sleep and the harsh conditions of street life leave people little room and patience to fuss about smaller things - as some guy with a camera and a lady with a microphone on a stick.

Melgar's approach pays off. Prior to any sort of reflection about the human rights of homeless people - be they EU-citizens, Swiss nationals or other migrants - and the obligations of states, of 'us', the viewer experiences a strong, almost visceral reaction to the images.

There are some remarkable shots too. For instance the pan, close to the end, from Amadou, a Mauritanian man around thirty years of age, waiting for an important decision about a work permit, to a man sitting 1 meter to the side of him, both sitting on the wall of the nightshelter. It's only a distance/pan of 1 meter, but looking at the face of the second, much older man after first having seen the brooding, worried face and posture of Amadou, one has the strong impression of looking at someone whose mind constantly wanders off to somewhere else than 'this' world. 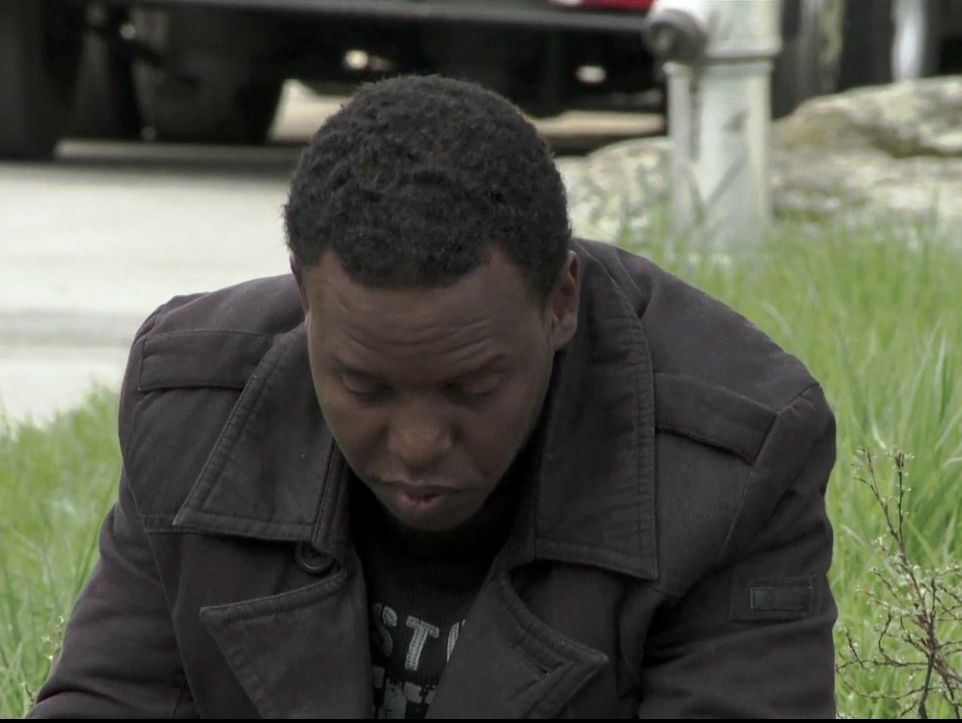 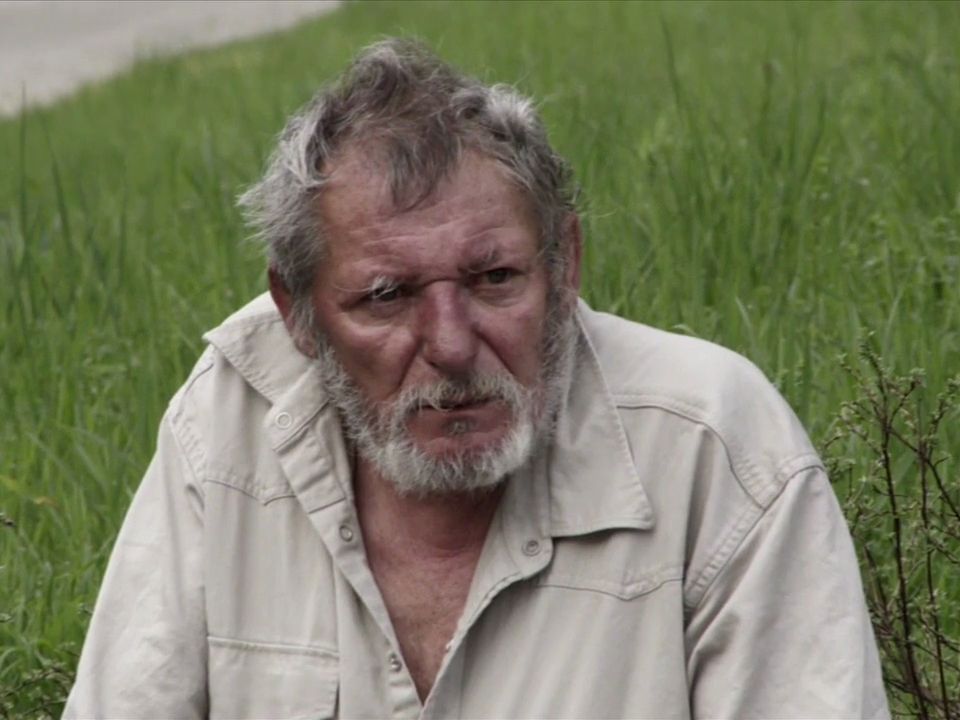 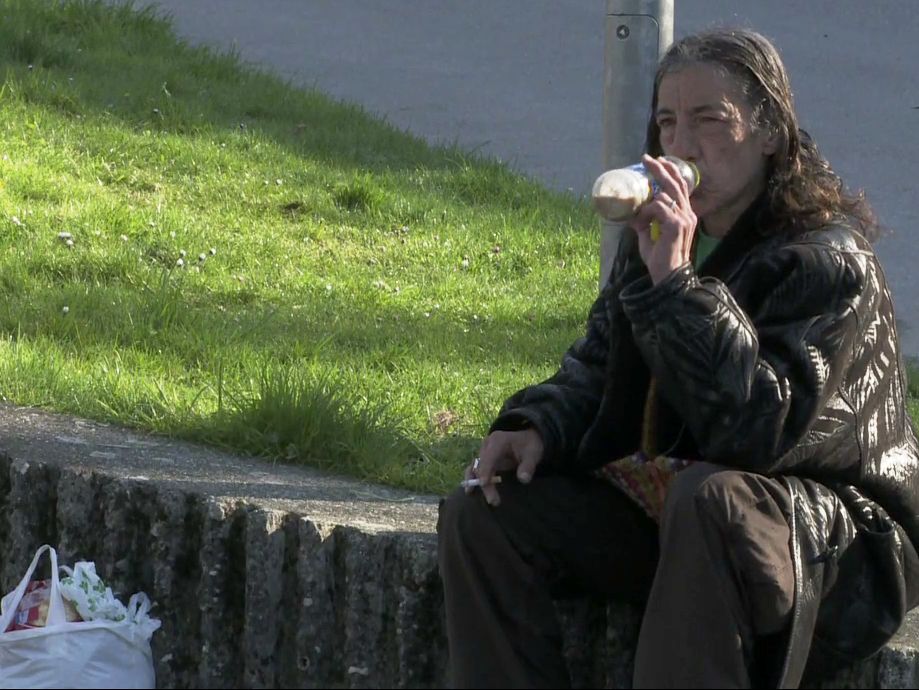 the pan and cut referred to in the text, reduced to three images

And then a cut to the third person present in this silent scene, another resident of the shelter we have come to know a little bit: an elderly lady having trouble to rise in the winter morning. We see her sipping lemonade and watching Amadou with recognition but little interest.

Also there are remarkable shots of children, who seem to adapt very flexible to whatever condition they find themselves in and seem able to squeeze drops of pleasure out of every situation – as long as mom and dad are around.

Mom and dad we see too, transforming from caring parents to beggars on the wet street in a matter of minutes - all it takes is a ride on the subway – their little son is proud to know the names of all the stops and to pronounce them properly (they are of Roumenian descent). Unfortunately one of his teeth is temporarily missing – and now he lisps, as he joyfully shares.

Apart from such emotionally moving scenes there is the experience of the passing of time, and repetition. Melgar followed the opening from the shelter in December until the closing in March. We see people shivering in the rain, the blanket of snow on the roofs of the houses of the people with houses, and then the blossoming of spring. Many times we see people gathering and waiting at the entrance of the shelter, and the hassle of selection. 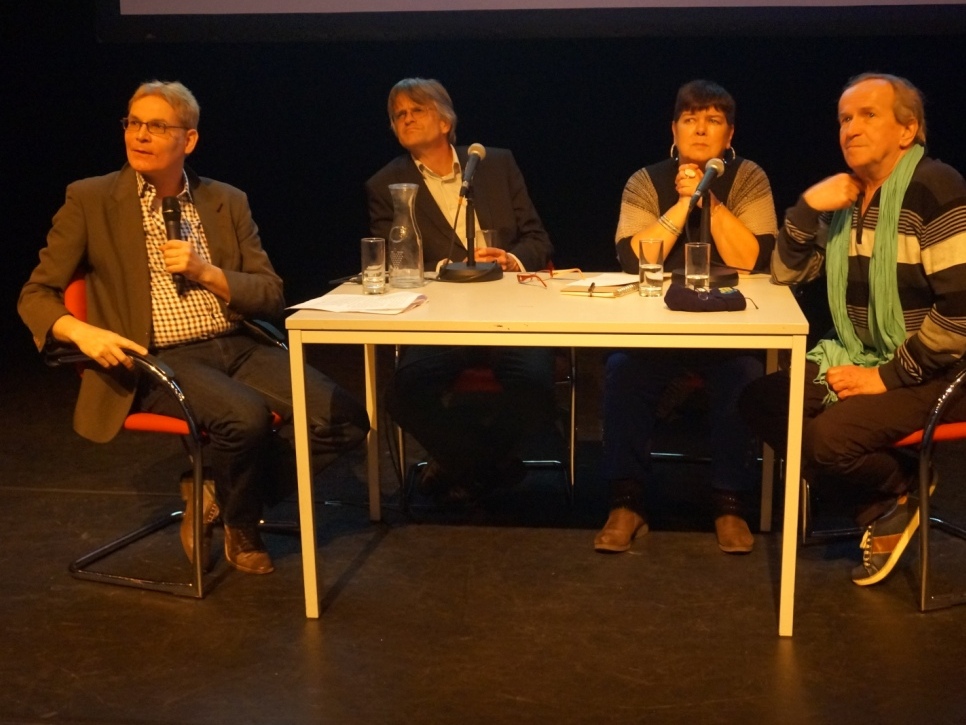 Nevertheless there was a discussion after the screening, worthwile in its own right. Yvonne Witte, nightporter of the Leiden shelter 'Nieuwe Energie', declared she was “shocked” by the documentary. Conditions in Leiden are far better than those in the documentary. In Leiden there used to be a winter schedule: in wintertime no homeless person was left out on the streets. After the verdict in november 2014 (see later) now there is no selection whatsoever.

With regard to the population visiting the shelter she saw no differences between the population of the Nieuwe Energie and that in Lausanne. Later she added, after a question from the audience, that recently in Leiden there is an influx of homeless elderly people. They end up homeless after a divorce or the death of their partner.

Witte also recognized the behavior shown by the visitors of the shelter in Switzerland. People in Leiden also complain easily about ‘discrimination’ by the employees and, just like in the documentary, sometimes have prejudices about other visitors.

Hans de Kinderen, the second guest, working with homeless people for more then ten years, after a period of being homeless himself, fleshed out the story of Witte with other interesting details.

Lawyer Pim Fischer, final guest, provided the judicial context to the story. His office represented the collaborating Dutch protestant churches (PKN) in an European lawsuit against the state of the Netherlands, started in 2013, about the way the Dutch government treats undocumented migrants. The European Social Committee’s verdict was made public november last year: Fischer/the PKN won on all points.

According to Fischer two of  the many deliberations of the European Social Committee in the verdict are the most relevant:

105. The Committee firstly recalls that under Article 13§4 of the Charter, the States Parties have undertaken to provide appropriate short-term assistance to persons in a situation of immediate and urgent need (Conclusions 2013, Malta). For this purpose, accommodation, food, emergency medical care and clothing should be provided. While an individual’s need must be sufficiently urgent and serious to entitle them to assistance under Article 13§4, this criterion must not be interpreted too narrowly. No conditions on the length of presence on the territory of the State Party in question may be set on the right to emergency assistance (Conclusions 2013, Montenegro).

117. The Committee observes in this connection that the scope of the Charter is broader and requires that necessary emergency social assistance be granted also to those who do not, or no longer, fulfil the criteria of entitlement to assistance specified in the above instruments, that is, also to migrants staying in the territory of the States Parties in an irregular manner, for instance pursuant to their expulsion. The Charter requires that emergency social assistance be granted without any conditions to nationals of those States Parties to the Charter who are not Member States of the Union. The Committee equally considers that the provision of emergency assistance cannot be made conditional upon the willingness of the persons concerned to cooperate in the organisation of their own expulsion.

After the verdict local Dutch judges have ordered city councils to improve the care for undocumented migrants. In fact the verdict concerns any person on Dutch soil, regardless of his or her legal status. The current Dutch government still tries to postpone implementing the verdict, but, apart from the sorry picture of this government's care about human rights treaties it leaves us with, time is running out: in about a month the last possibility for delay will have passed.

Fischer found it difficult to predict the consequences of the verdict. He wasn't sure medical care for people would improve too (despite Article 13.1). When asked he suddenly came up with the UN-treaty about the rights of persons with a disability, that is to be ratified this summer by the Dutch government. Here he imagined major changes could result, depending on the interpretation by judges of terms like "adjusted" (as in "buildings adjusted for") or "Accessibility". 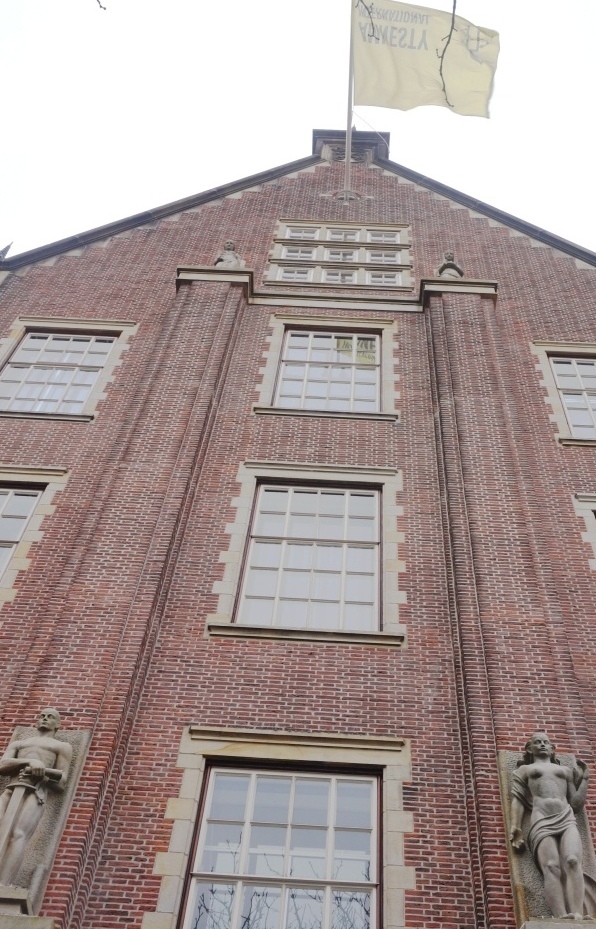